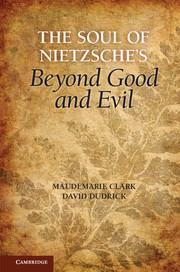 This book presents a provocative new interpretation of Beyond Good and Evil. Arguably Nietzsche’s most important book, it appears to express merely a loosely connected set of questionable opinions. Can Nietzsche really be an important philosopher if this is his most important book? Maudemarie Clark and David Dudrick address this question with a close reading of the book’s first part. They argue that more careful attention to how it is written allows us to see that it presents deeply interconnected arguments for subtle and well-thought-out positions on traditional issues. Nietzsche’s infamous doctrine of the will to power turns out to be a compelling account of the structure and origin of the human soul. And although he rejects aspects of traditional philosophy, Nietzsche aims to show how philosophy’s traditional aspirations toward both the true and the good can be fulfilled. Beyond Good and Evil turns out to be a major work of philosophy and Nietzsche’s masterpiece.