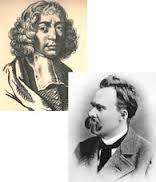 Friedrich Nietzsche wrote in 1881: “I am utterly amazed, utterly enchanted! I have a precursor, and what a precursor! [T]his most unusual and loneliest thinker is closest to me precisely in these matters: he denies the freedom of the will, teleology, the moral world-order, the unegoistic, and evil.”

This conference brings together scholars from around the world working in differing intellectual traditions to explore the many connections between the thought of Spinoza and Nietzsche. Both are in a range of respects radical thinkers with a highly individual approach to the tradition that preceded them. This event will put Spinoza and Nietzsche in dialogue, and in so doing widen the dialogue among scholars, and in addition bring the discussion to a wide public.

The event is free to attend, but please register at spinozanietzsche.eventbrite.co.uk/#