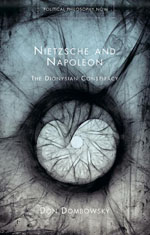 Among Nietzsche’s favourite authors were Bonapartists, who largely formed Nietzsche’s view of Napoleon – open the pages of the Nietzschean corpus and you will find a Napoleonic landscape, and Nietzsche’s promotion of Napoleon serves to support the Bonapartist movement of the late nineteenth century. This book contains an innovative treatment of Nietzsche’s political thought, far exceeding in scope and insight any previous writings on the subject.

‘Read as sequel to his seminal Nietzsche’s Machiavellian Politics, Don Dombowsky’s book is a major contribution to our ongoing search for the absent cause or signifier of Nietzsche’s intentionally illusive articulation of his version of nihilism with his equally misunderstood and concomitant political project. Combining astute textual analysis with broad historical understanding, Nietzsche and Napoleon is a significant publishing event.’

‘This is a ground-breaking study of Nietzsche’s Caesarism and Bonapartism – two of the most promising inlets into Nietzsche’s political thought. Dombowsky provides us with a thorough and systematic, yet subtle study that offers a unifying reading of Nietzsche’s pronouncements on politics, and sheds new light on their relationship to historical events. Drawing upon a wealth of sources, both scholarly and literary, Nietzsche and Napoleon has all the hallmarks of becoming a reference work in the field.’